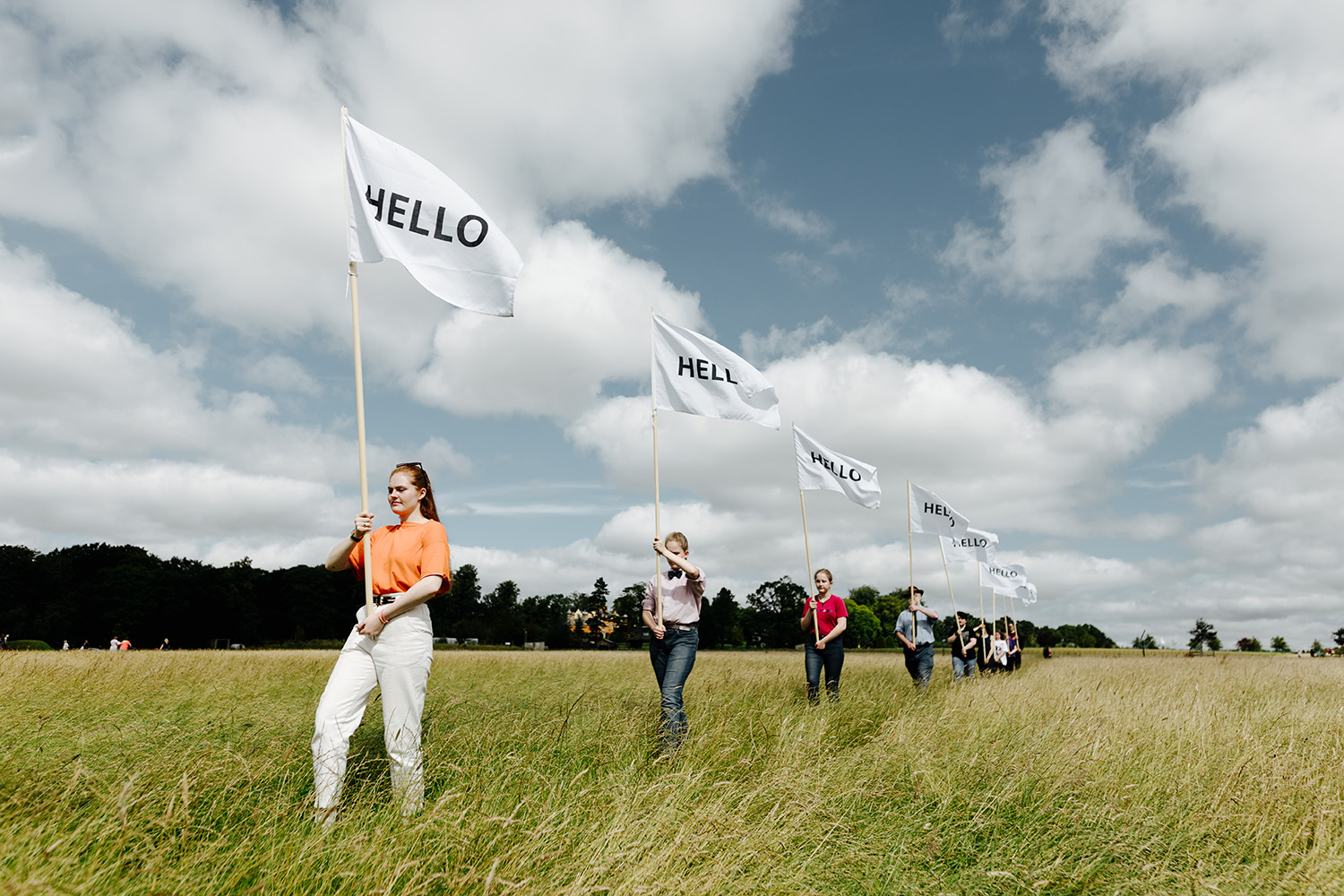 10 artists invited to mark the dates of our 2020 edition with a series of artist responses, online and around the city

It was with great sadness that, in April this year, as a result of the Covid-19 pandemic, the 2020 edition of Edinburgh Art Festival was cancelled. Now, as Edinburgh begins to emerge from lockdown and we reflect on a period of unprecedented global change and upheaval, Edinburgh Art Festival have invited ten artists from previous festival editions, to mark the dates of what would have been their 2020 festival (30 July – 30 August).

Ruth Ewan; Ellie Harrison; Tam Joseph; Calvin Z Laing; Peter Liversidge; Tamara MacArthur; Rosalind Nashashibi; Rae-Yen Song; Shannon Te Ao; and Hanna Tuulikki will each present work as part of this August offering. Combining archival presentations chosen for their resonance in relation to the current context (local and global), alongside specially conceived responses, the selection includes online screenings and live performances, available via the festival website from the 30th July as well as a small number of projects appearing in public sites around the city.

The selection is informed by and seeks to reflect on the profound personal and societal impacts of this global pandemic – as we look to find new ways of communicating and being together; to confront the urgent inequalities in our society; and to imagine new futures.

Above all, the festival is guided by a desire to connect with artists and audiences, as we look forward with optimism to returning next year: 29 Jul to 29 Aug 2021.

Online and Around the City

Ruth Ewan revisits her Sympathetic Magick (2018) project, where she invited magicians to consider how they might use their magic to change the world; with an online presentation of her short film, Worker’s Song Storydeck (devised with magician Billy Reid), and a special poster series devised with magician Ian Saville, calling upon all of us to join together in a ‘mass action for the radical transformation of society’.

Artist and activist Ellie Harrison (2012 and 2014 festival programmes) presents an up-to-date version of her graph showing the Tonnes of carbon produced by the personal transportation of a ‘professional artist’ at a city centre poster site. Created through the meticulous analysis of the 3,988 journeys she has made over the last 17 years, Harrison makes connections between literal and social mobility and highlights the consequences of our travel choices for our climate, which have come into focus in all our lives during lockdown.

Tam Joseph re-presents The hand made map of the world, first presented as a billboard in the 2014 festival. Transforming and subverting the ‘World Political Map’, Joseph playfully renames familiar landmasses (America becomes China; United Kingdom becomes Cuba) to lay bare the destructive quest for territorial control which has dominated geopolitics over the centuries, and critique the supposed ideological neutrality of maps. Sited on The Meadows, Joseph is drawn to the history of this green space, which in 1886 hosted the International Exhibition of Art, Industry and Science.

Calvin Z. Laing (whose film Calvin & Metro, featured in our 2012 programme) revisits the neighbourhood of his childhood in the suburbs of Edinburgh to present a new online performance Calvin & Jogging. Reflecting on how lockdown for many has resulted in a return to the family home and memories, as well as taking up new reactive activities, the artist uses humour and the tools of stand up to explore nostalgia, and the disintegration of public and private space.

Peter Liversidge revisits his 2013 festival commission Flags for Edinburgh which invited buildings across the city to fly a white flag that reads HELLO. As we emerge from an extended period of isolation, and look to find new ways to be together, Liversidge invites organisations and communities across Edinburgh, alongside partner August Edinburgh festivals to send a collective greeting to each other and the wider world; with HELLOs flying from rooftops across the city, including libraries, hotels, galleries, museums, consulates, schools and community parks.

Flags for Edinburgh coincides with the launch of Liversidge’s Sign Painting Studio at Jupiter Artland, where members of the public can order a placard to be painted and take away for free, created with Jupiter’s ORBIT Youth Council, a group of 16 to 18 year olds recruited from every corner of Scotland.

Following on from her 2019 Art Late performance at Dovecot Studios, Tamara MacArthur creates a new online performance investigating our desire for closeness and contemporary methods devised to simulate human contact in a time of social distancing. For It’s All Over But the Dreaming, the artist will perform live from an elaborate theatrical set built in her studio, holding close a hand-made life-size doll, to explore themes of loneliness, yearning and futility in relation to the enforced isolation we have experienced since Coronavirus.

Rosalind Nashashibi shares an online presentation of her two-part film commissioned for the 2019 edition of the festival, following a group of individuals coming together in preparation for an experimental journey into space, to explore the importance of storytelling and love in the building and sustaining of community.

Rae-Yen Song expands on a project for the 2018 festival, to add to an ongoing familial collaboration, Song Dynasty. Presented both online and as a poster at a site in the city chosen for its special connection to the artist’s family, the work draws on autobiography and fantasy to speak broadly and politically about foreignness and the position of the Other, archiving a modern myth that settles and lives through virtual, imagined and public spaces.

Shannon Te Ao’s two screen video installation With the sun aglow, I have my pensive moods, commissioned for the 2017 festival edition, is a poetic meditation on themes of love, grief, sickness and healing. Taking its title from a tribal lament composed by Te Rohu (daughter of Tūwharetoa chief, Mananui Te Heu Heu), Te Ao counterposes cinematic references, using footage shot at a number of locations within Te Ao’s tribal lands including some of the farm lands which directly encircle the urupa (familial burial grounds) of Te Ao’s family.

Hanna Tuulikki’s Sing Sign: a close duet, commissioned for the 2015 edition, reflects on that innate human desire to communicate and connect, a vocal and gestural suite devised for the historic ‘closes’ of Edinburgh – the small alleyways that lead off either side of the Royal Mile. Tuulikki also presents a special live performance of an extract from the work on-line, with her collaborator Daniel Padden – looking to the performative possibilities of the digital technology which has become such a critical tool for us all in recent months.

This series of responses has been made possible thanks to the support of the Scottish Government’s Festivals Expo Fund and EventScotland, part of VisitScotland’s Events Directorate.

Support for artists in the early stages of their career

Despite the cancellation of the festival this year, we are delighted to confirm that Platform, the festival’s annual showcase supporting artists in the early stages of their careers to make and present new work, returns with a physical exhibition in the Autumn.

Selected from an open call by artist Ruth Ewan, and curator Sophia Hao, (Cooper Gallery, Duncan of Jordanstone College of Art & Design), four artists based in Scotland – Rabindranath Bhose, Mark Bleakley, Rhona Jack and Susannah Stark have been selected to take part, with further details being released later in the coming weeks.

Platform: 2020 is made possible thanks to the PLACE Programme, a partnership between Edinburgh Festivals, Scottish Government, City of Edinburgh Council and Creative Scotland.

As we emerge from lockdown, festival partners are busy making plans to reopen their galleries, studios and production spaces across the city. For further details, click here.

Sorcha Carey, Director, Edinburgh Art Festival said: “It is hard to imagine an Edinburgh without festivals this Summer. We, along with our colleagues in the August festivals, will miss welcoming artists to the city this year and the opportunity to engage with audiences from Edinburgh and around the world – not least because, at a time of such significant global change, art offers a vitally important space for collective reflection, and to imagine new possibilities.

I would like to thank all the artists who have so generously agreed to contribute a response to our August offering, and have risen creatively to the challenges of presenting work despite the ongoing restrictions. We very much look forward to being back next year, and in the meantime we are sending a hello from Edinburgh to friends across the city and around the world.”

Edinburgh Art Festival returns next year from 29 Jul to 29 Aug 2021 – as always working closely with the festival’s partner galleries, and alongside the extended network of August festivals, to celebrate the work of artists with audiences and communities across the city.

We use cookies on our website to give you the most relevant experience by remembering your preferences and repeat visits. By clicking “Accept All”, you consent to the use of ALL the cookies. However, you may visit "Cookie Settings" to provide a controlled consent.
Cookie SettingsAccept All
Manage consent

This website uses cookies to improve your experience while you navigate through the website. Out of these, the cookies that are categorized as necessary are stored on your browser as they are essential for the working of basic functionalities of the website. We also use third-party cookies that help us analyze and understand how you use this website. These cookies will be stored in your browser only with your consent. You also have the option to opt-out of these cookies. But opting out of some of these cookies may affect your browsing experience.
Necessary Always Enabled
Necessary cookies are absolutely essential for the website to function properly. These cookies ensure basic functionalities and security features of the website, anonymously.
Functional
Functional cookies help to perform certain functionalities like sharing the content of the website on social media platforms, collect feedbacks, and other third-party features.
Performance
Performance cookies are used to understand and analyze the key performance indexes of the website which helps in delivering a better user experience for the visitors.
Analytics
Analytical cookies are used to understand how visitors interact with the website. These cookies help provide information on metrics the number of visitors, bounce rate, traffic source, etc.
Advertisement
Advertisement cookies are used to provide visitors with relevant ads and marketing campaigns. These cookies track visitors across websites and collect information to provide customized ads.
Others
Other uncategorized cookies are those that are being analyzed and have not been classified into a category as yet.
SAVE & ACCEPT